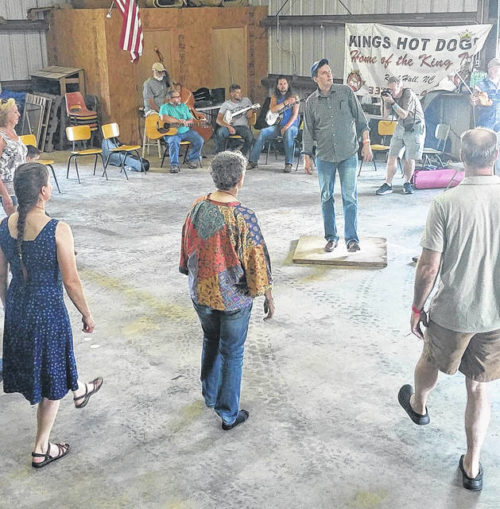 While travel restrictions due to COVID-19 prevented most international fans from attending Mount Airy Bluegrass and Old Time Fiddler’s Convention over the weekend, there were many fans in the US more than happy to see the event return after the hiatus caused by the pandemic last year. …

“I don’t know how many people there were,” said Judy Joyner, who co-hosted this year’s festival with her husband Doug Joyner. “But I had 700 car registrations and I handed them all out.”

This, she said, does not include people who parked their cars in nearby streets and went to the festival.

“We’ve had a lot of comments from people who said they were happy to be here, glad the convention is back,” said Michael Thorpe, a former park board member and longtime volunteer for the festival. “We have a good crowd and no rain,” he added.

Jim Wipperman, a local musician and music teacher who oversaw the Serry Arts Council’s Friday workshops, he is estimated to have seen at least 150 people walk through various classes that day.

“And the convention doesn’t even start later,” he said Friday afternoon.

Judy Joyner said that while she and her husband watched the convention, it required a lot of volunteers, especially given the fact that they weren’t sure if the convention would take place this year until the end of March.

She highlighted that Randy and Tanya Hiatt were the main reason the convention went so well.

Randy Hiatt, a longtime musician known to many as “Frosty,” said he ran into people from Florida, New York and New Orleans at the event. Other members included fans and musicians from across North Carolina and Virginia, Maryland, Connecticut, Kentucky, Tennessee, and throughout the South. A quick walk through the parking lot at times showed license plates for countries as far away as California and Alaska.

While many come to the convention to renew old friendships, buy and sell music-related merchandise, and take part in spontaneous jam sessions, music and dance competitions and shows are always in the spotlight. This year was no exception: dozens of musicians took part in almost two dozen separate competitions.

Folk Song for Adults: 1st place went to Stuart Werner III of Rocky Mount, Virginia; the second was Elsa Howell of Roanoke, Virginia; the third was Eliza Meyer of Raleigh; fourth was Tommy Nichols of Mount Airy and fifth was John Curtis Combs of Crown, Kentucky;