Two local banks have teamed up to finance the next phase of renovation to the former RedBird Mall in southwest Dallas.

Texas Security Bank and Texas Brand Bank are providing $ 13.5 million in construction loans for the construction of the central office section of the project on Interstate 20 and US Highway 67.

The nearly $ 200 million renovation of the former shopping center includes new shops and apartments, a hotel and office space.

Texas Security Bank and Texas Brand Bank provided construction finance for the offices – a combination of new construction and recycling of existing space.

“To our knowledge, this is one of the largest projects south of I-30 in years,” said William Lowe, president and chief executive officer of Texas Brand Bank. “This renovation will provide a total of 1,600 jobs in this area of ​​the city.”

Developers Terrence Maiden and Peter Brodsky, a Dallas investor who owns the mall, have been working on the redevelopment of nearly 80 acres for over three years.

Parts of the old shopping center were demolished.

Other parts of the mall, built over 45 years ago, are being reused with new offices for Atlanta-based Chimes Solutions. Health facilities are also being built for the University of Texas Southwestern Medical Center, Children’s Healthcare and Park Health System and hospitals.

“We are funding further construction and renovations that will allow Chime to expand and open stores and restaurants,” Lowe said. “We thought it was an interesting project.

“This is clearly a game changer for the South Dallas community.”

“We’ve been working on this development since 2017,” said Cache Realty CEO Scott Lynn. “We financed it block by block, deal by deal.

“Now there are probably five different banks that provide loans for different parts of the property,” he said. “All construction loans are driven by demand from tenants.”

Lynn said that funding negotiations for the final phase began prior to the deployment of COVID-19 vaccines.

“This latest work was in development before the vaccine was launched, and there were still questions about whether people would return to work,” he said.

The City of Dallas has also supported the RedBird Reimagined project with millions of dollars in financial incentives.

“Right now it looks like a war zone, but it’s a massive transformation,” Lynn said. “When it’s finished later this year, it will be incredible.” 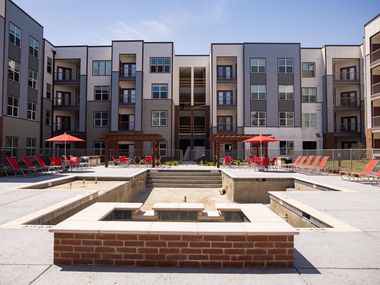