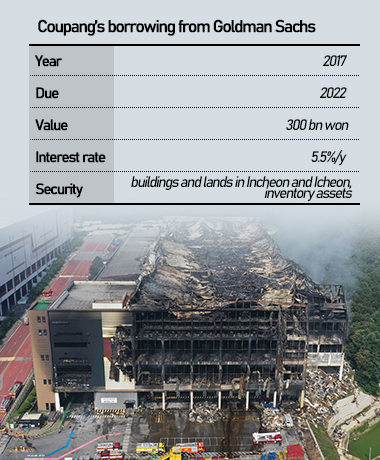 A US investment bank is investigating whether the deadly fire at the Coupang distribution center is an event of default (EOD), which refers to the occurrence of an event that allows a lender to demand repayment of a loan before it occurs. deadline, according to industry sources on Sunday. Experts say Goldman Sachs may require an advance payment if the building is proven to have lost its value due to the fire.

Coupang borrowed 300 billion won maturing over five years from Goldman Sachs Asian Specialituations Group (ASSG) in 2017 secured by the 40,000 square meter (430,556,417 sq ft) building and plot in Incheon and its inventory, and Warehouse with an area of ​​60,000 square meters and an adjoining plot in Icheon. The collateral was valued at 500 billion won and applied at a 60 percent loan-to-value (LTV) ratio. Goldman Sachs is known to have resold KRW 200 billion in debt at 4 percent per annum, while the remaining KRW 100 billion belonged to 8.5 percent annual subordinated bonds.

Coupang took out a 300 billion won loan at 5.5 percent per annum. The cost of borrowing was higher than the industry average at the time due to the company’s losses and low credit ratings, the sources said.

But now that has changed because the e-commerce market is booming and the company debuted on the New York Stock Exchange with a valuation of 100 trillion won. Even if Goldman Sachs demands early repayment of the debt, the company is expected to have no problem borrowing from other lenders on better terms.

An industry source said that many financial institutions are willing to provide loans to Coupang, and the company can obtain loans at less than 2 percent per annum.