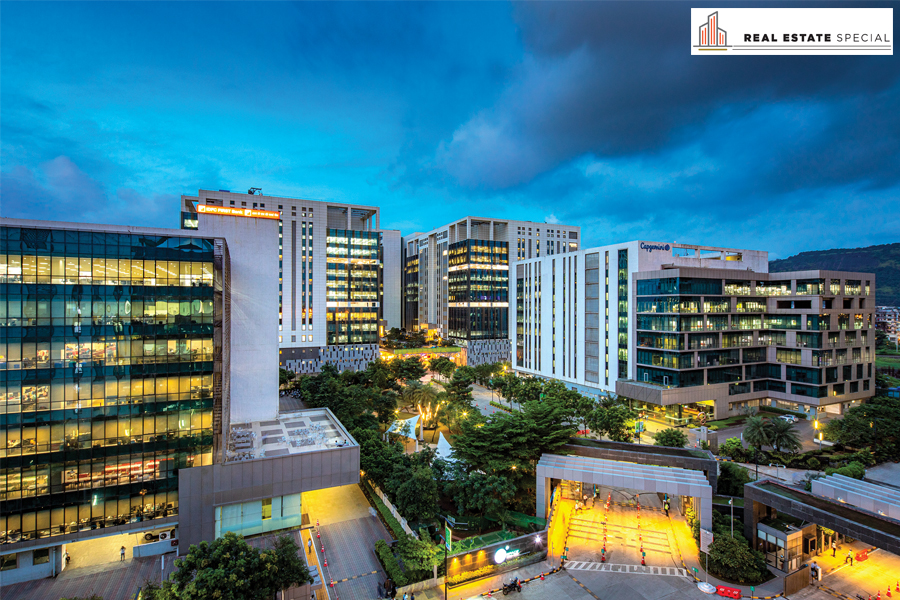 Commercial real estate growth in India continues to be dominated by large, new-generation technology parks, which have emerged over the past two decades across Bengaluru, Hyderabad, Mumbai, Delhi and Pune. Chandigarh and Kolkata are now attracting investments too. This, according to Nasscom, has been due to the emergence of over 8,100 digital solution providers, employing about 600,000 employees—approximately 75 percent of the global digital talent base.

Job opportunities at Infosys and Wipro led to thousands of students flocking to Bengaluru from across India. Today Bengaluru has a total office stock that is higher than Beijing, Hong Kong, Singapore, San Francisco or Tokyo. Bengaluru alone absorbed more space than Shanghai, Beijing and Hong Kong combined, between 2014 and the first half 2020 (see table), according to CBRE.

Scouting for land, new leasing slows
But much of the hunt for low-cost office space in India slowed during the pandemic-related nationwide lockdowns of 2020, and then with the second wave of Covid-19, which has crippled business activity once again, April 2021 onwards. Technology giants continue to offer long-term, remote work (work-from-home or WFH) plans for their employees, and even corporates that had signed pre-lease agreements for office spaces have not been able to call their employees back to work due to the fresh outbreak.

“This has meant three to four months of delay in decision-making,” says Lalit Ahuja, founder-CEO of ANSR, a Dallas-headquartered consultancy firm that works with multinationals to incubate global capability centres, including designing the infrastructure and maintaining the office on behalf of clients. 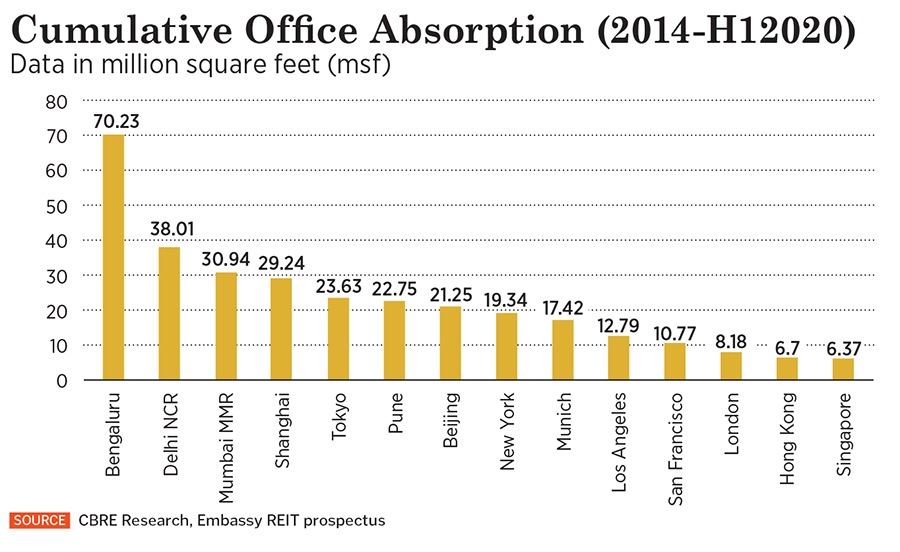 ANSR, whose 85 percent of business revenue comes from India, has made a commitment to develop 8 msf of property, of which 70 percent is for Embassy Office Park REIT at its Embassy Manyata, Embassy TechVillage and Embassy GolfLinks business parks in Bengaluru. For the balance 30 percent, ANSR is working with RMZ Developers in Bengaluru and with Gar Corporation in Hyderabad.

By portfolio, Blackstone-backed Embassy REIT is India’s largest, which owns, operates or manages commercial property of 42.4 msf (completed, under construction and proposed future development) through 12 commercial offices in Bengaluru, Mumbai Pune and Delhi. Mindspace Business Parks REIT, whose marquee investors include Capital Group, GIC and Fidelity, is next, with a portfolio of 30.2 msf of total leasable area, across Hyderabad, Mumbai, Pune and Chennai. Brookfield is the third largest, with a portfolio of 14 msf across Mumbai, Gurugram, Noida and Kolkata.

All the three major players and ANSR say that clients who had signed pre-leased agreements with them remain committed. “Everyone who signed up pre-Covid-19 stand committed, have completed interiors and fit-outs, ready for occupancy,” says Vinod Rohira, CEO of Mindspace Business Parks REIT. ANSR’s Ahuja says of the 50 large corporates he represents “none has backed out or spoken of downsizing. They have, however, delayed plans”.

According to Minneapolis-based global alternative investment fund house Varde Partners, which invests in real estate assets, a slowdown in leasing activity was “natural and expected”. “In assets with lease-up risk, where an asset has been bought and is waiting for leasing activity, activity has slowed down. The volume of activity of potential tenants wanting to take decisions is slower at this stage,” says Tim Mooney, partner and global head of real estate at Varde Partners, which has invested $2 billion in India’s real estate. 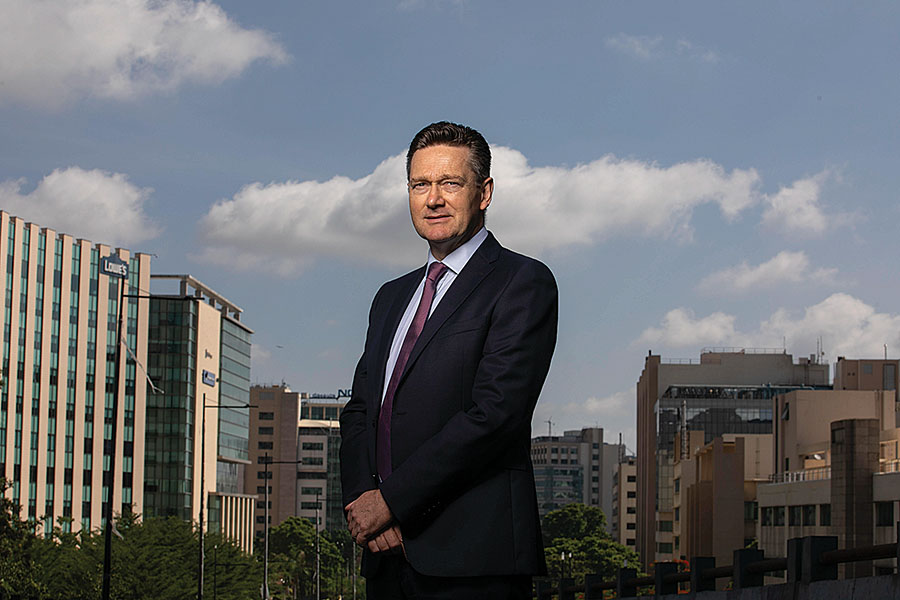 Embassy REIT has concluded 1.2 msf of lease-up over 43 deals, despite FY21 being a slower year for leasing in India, compared to the record net office lease-up of 48 msf in 2019. “So, while it has been slower [this year], we are confident in the recovery of the leasing volumes,” says Michael Holland, CEO of Embassy REIT. Embassy’s development plan to deliver 5.7 msf of office space over the next three to four years in Bengaluru, Noida and Pune is underway.

But supply is not matching demand at this stage. “The two-year forward-supply is expected to be down by 25 percent. So, while there is a slowdown in leasing, there is also a slowdown in supply coming on stream,” Holland adds.

WFH debate softens; de-densification of offices
Even as corporates are slow to decide on new properties, experts say the work-from-home option for employees in India might not last long. “There is a general consensus that corporates want to get their employees back to office as soon as it is safe,” says Embassy’s Holland. Mindspace’s Rohira agrees, saying corporates are likely to take baby steps towards working from offices. “They may not be comfortable currently, but once a majority of the workforce is fully vaccinated, corporates could restart with 35 percent of its staff coming to offices and gradually increase it to 60 percent,” says Rohira.

For large corporates or startups, factors such as maintaining data security and firewalls, administration and HR functions, collaboration of teams for special projects call for employees to be back at offices.

“ There is a general consensus that corporates want to get their employees back to office as soon as it is safe.”
Michael Holland, CEO, Embassy REIT

New office premises are being designed with larger boardrooms, townhalls and fewer office desks. For ANSR this has meant capex costs going up by as much as 15 percent in some cases. “Workspaces need to be contactless, technology-focussed, with loose furniture. Some companies also want to create an experimental experience with more merchandise and visual representation of the company,” Ahuja says.

But the pandemic is also forcing corporates to move in for de-densification of premises, making them less densely populated and increasing the area per person. In previous years, this figure had come down to as low as 80 sq ft per person, but Ahuja now sees it going back to the average 120 sq ft, and in some cases, such as at Embassy Manyata, up to 200 sq ft per person.

Some large corporates with over 50,000 employees might offer work options to some of its young millennials, who have migrated back home during the lockdowns. They may consider urging employees to choose a new location of work that can be just 10 to 15 minutes from their homes.

The next three to six months are crucial for India. If it can avoid a third wave and ensure that the active workforce and their families get fully vaccinated, the shift back to office premises will be more feasible. “The [office space] market will go on fire,” Ahuja says.

Corporates holding on to office space
With pre-leasing commitments largely intact and no downsizing, corporates are clearly holding on to office spaces, with the belief that as the country gets more control over the health care emergency, occupancy at offices will start to improve. Most global corporates were starting to get ready to open their offices in June-July, but this has now been extended to October or even end-2021.

Varde’s Mooney says he would be “very surprised” if this market moves significantly to lower occupancy rates or if it fell off the cliff in incremental developments.

Wherever deferral of leasing, however rare, has taken place, it is not related to rental prices, as rents form just around 3 percent of total costs for a corporate. Thus low rents, compared to the US and UK, besides the absorption of new talent in technology, will continue to be a strong growth engine for its segment.

Anshuman Magazine, CBRE’s founder and CEO (India, Southeast Asia and Africa), however, says it is “difficult” to predict how the market will evolve. Their recent survey highlighted that the ‘purpose’ of offices will change. He adds that there was achievable real estate savings due to hybrid/remote-working. There will thus be a demand for ‘blended’ offerings that include traditional offices, flexible/co-working spaces, and personalised human-delivered services—enabled by new technologies, Magazine says.

In assets with lease-up risk, where an asset has been bought and is waiting for leasing activity, activity has slowed down.”
Tim Mooney, Partner, Varde Partners

Shopping malls: Hurt, but not out
Business activity at shopping malls has been among the hardest hit—besides aviation and the hospitality sectors—by the pandemic. Rolling lockdowns last year and in April-May 2021 have meant that shopping malls have seen irregular operations—shutdowns and restarts—which have hurt them and their retail tenants.

Phoenix Mills, India’s largest retail-led mixed use developer, has real estate assets in 10 cities in India. It reported an 84 percent fall in net profit at ₹52.6 crore in FY21, on income of ₹1,073.3 crore, a fall of 48 percent. Retail rental income for the company, on a consolidated basis, fell by 39 percent to ₹728.9 crore in the 12 months to March 31, after the company resorted to giving hefty discounts on fixed rentals to its tenants when the malls shut operations.

Malls are ready to open once again in June, and mall owners are hopeful of a sharp bounce-back in consumption as was seen in January-March this year, when consumption neared 90 percent of pre-pandemic levels. “I expect to see a similar bounce-back when malls open after this current lockdown,” says Shishir Shrivastava, managing director, Phoenix Mills. Electronics, jewellery and watches led the bounce-back in Q4FY21.

After this disruption of nearly two-and-a-half months, negotiations for possible waivers and discounts for retailers will start after malls are operational and there is cash flow visibility. Several mall owners have moved to adopt a revenue-sharing rental model, rather than fixed rentals, while some operate with a mix of both.

Shoring up balance sheets
Even while mall owners expect a bounce-back in consumption, which might result in improved incomes, Grade A developers such as Phoenix Mills struck two deals during the pandemic, one with private equity investor Canada Pension Plan Investment Board and with Singapore’s GIC, through stake sales. “At our consolidated balance sheet level, on completing all transactions, we will see liquidity of about ₹2,500 crore, which will help us withstand any business-related uncertainties. Even if there was a sizeable impact to our rentals, with this liquidity boost, we can go by the next 24 months for all capex commitments, operational expenses and interest and debt service obligations,” Shrivastava says. Current debt of ₹4,510.2 crore is backed by income generating assets.

More than 12 equity research firms have upgraded the stock to a ‘buy’, which has reflected in investor interest; the Phoenix Mills stock was up by 40 percent from a year-ago levels, at ₹848 at the BSE.

Cover story: From real estate to gas pipelines and renewables, how Brookfield grew in India and invested $11.5 billion in pandemic year

DLF, another listed real estate and mall developer, which operates eight malls across the NCR region and Chandigarh, reported a net loss of ₹583.9 crore for the full year ended March 2021, against a loss of ₹1,479 crore for the corresponding period in the previous year.

There is still time before rentals climb back to 2019 levels. Rental levels are in all likelihood expected to improve in the second half of FY22, and would be, by then, at levels similar to FY20. An actual uptick in rentals will happen only in FY23, by which time business activity would be back to normal pre-Covid levels. Store size optimisation and flexible lease offerings and space are likely to drive retailer interest. While mall owners have not disclosed data, fresh leasing activity for retail has slowed down, but it is expected to pick up only when there are no disruptions to mall activity.

Click here to see Forbes India’s comprehensive coverage on the Covid-19 situation and its impact on life, business and the economy​

(This story appears in the 02 July, 2021 issue of Forbes India. You can buy our tablet version from Magzter.com. To visit our Archives, click here.)