Deputy Governor Ed Sibley said there are broader concerns with the legacy of mortgage debt, including the cost of the loan for all borrowers and the attractiveness of the Irish mortgage market for new entrants.

The Deputy Governor’s speech coincided with the publication today of four separate Central Bank reports on the mortgage market.

According to one report, as of March of this year, 95,000 accounts, or 13% of all mortgages for primary housing, will have some underpayment at the end of their term.

The deficit arises as a result of some form of restructuring or interruption in payments during the term of the loan, according to the central bank. 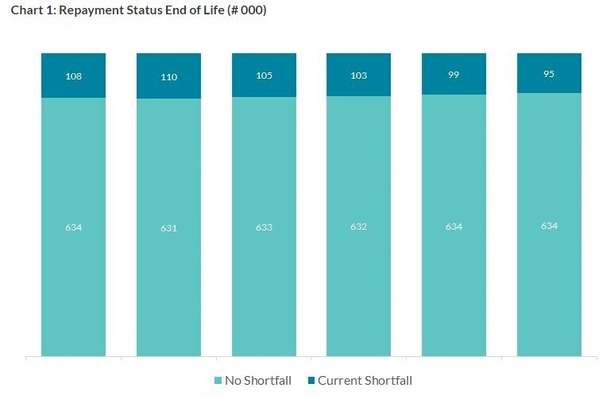 He said that this amounts to 14.5 billion euros in loans. Two thirds of these loans have a deficit of more than 10% of the loan amount. 54% of these loans are not restructured.

The Central Bank estimates that 27% or 25,650 deficit accounts will be repaid for less than 50% of the value of their loans by the end of their term.

22% or just over 20,000 accounts are described as “uncertain” because there was not enough interaction between the lender and the borrower to figure out how much could be repaid.

79% of accounts with a deficit of more than 10% have positive equity, which means that the value of the home exceeds the cost of the loan.

Almost 29,500 mortgage loans overdue for more than a year

Another Central Bank report shows that 29,429 mortgage accounts are overdue for more than a year.

The bank describes these accounts as “a legacy from the pre-Covid era.” Most of the debt originated during the financial crisis.

This figure is below the peak of 60,995 overdue accounts in June 2014 and represents 4% of all major home mortgages and just over € 6 billion in loans. They account for 54% of all overdue mortgage loans.

The Central Bank estimates that these mortgages represent about 25,000 households because some people have more than one mortgage.

About half of these mortgages are classified as “non-cooperative”.

The central bank analyzed a sample of over 8,000 of these mortgage accounts. It turned out that the average age of a mortgage holder was 48 years, and the average outstanding debt was just over 153,000 euros.

Half of borrowers with long-term mortgage debt owe more than 43% of their monthly debt repayment income, an average of 61%. About a third are unemployed.

Most borrowers with long-term debt are between 40 and 60 people. About 12% of borrowers are over 60 years old, and couples with children make up 58%.

Economic Impact of Covid Compared to the Financial Crisis

Another central bank report compares the impact of Covid-19 on the economy with the financial crisis.

With Covid, unemployment soared over the month in April 2020 from 5% to 30% due to public health restrictions.

However, today’s report says that EIT and other support tools were more likely to support income.

It also revealed that real estate prices in 2020 remained unchanged and began to rise earlier this year. By comparison, house prices fell 55% during the financial crisis.

The report found that 30% of loans to small and medium-sized companies took advantage of the debt repayment moratorium.